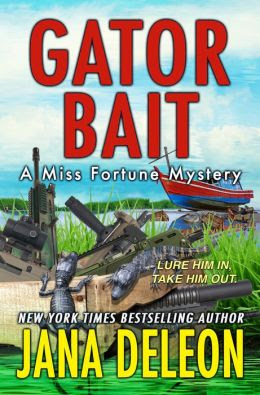 Things are starting to look up for Fortune Redding. Even though her life was at stake, the CIA assassin had balked at taking on a new identity in Sinful, Louisiana. But instead of hating it like she’d thought she would, Fortune now has friends she cares about and just finished up an incredible first date with the sexiest deputy in the state. Sure, there’s been a murder or two that she’s gotten mixed up in since she arrived in town, but she’s hoping all of that is behind her.

But when someone almost kills Deputy Carter LeBlanc, Fortune tosses her dreams of peace and quiet into the muddy bayou and shifts back into being the deadly trained professional that she is. With the help of Ida Belle and Gertie, Fortune launches a manhunt, intending to find a killer before he tries again.

About Jana:
New York Times and USA Today bestselling author Jana DeLeon was raised in southwest Louisiana among the bayous and gators. Her hometown is Carlyss, but you probably won’t find it on a map. Her family owned a camp located on a bayou just off the Gulf of Mexico that you could only get to by boat. The most important feature was the rope hammock hanging in the shade on a huge deck that stretched out over the water where Jana spent many hours reading books.
Jana and her brother spent thousands of hours combing the bayous in a flat-bottomed aluminum boat, studying the natural habitat of many birds, nutria and alligators. She would like you to know that no animals were injured during these “studies,” but they kept makers of peroxide in business.
Jana has never stumbled across a mystery or a ghost like her heroines, but she’s still hopeful.
She now resides in Dallas, Texas, with the most spoiled Sheltie in the world.
Posted by Sarah at 8:35 PM