Lord of the Vampires by Gena Showalter 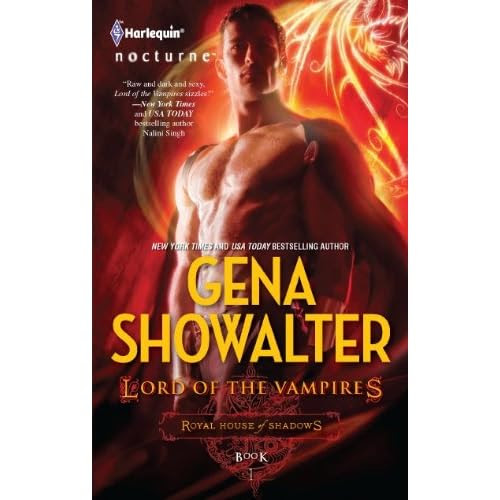 Back of the Book Blurb:
Once upon a time…the Blood Sorcerer vanquished the kingdom of Elden. To save their children, the queen scattered them to safety and the king filled them with vengeance.
Only a magical timepiece connects the four royal heirs…and time is running out.…
Nicolai the Vampire was renowned for his virility, but in a twist of fate "The Dark Seducer" had become a sex slave in the kingdom of Delfina—stripped of his precious timepiece and his memory. All that remained was a primal need for freedom, revenge—and the only woman who could help him.
In her dreams, a wanton vampire called to Jane Parker, drawing her to his dark sexuality and his magical realm.
But for a human, all was not a fairy tale in Delfina. Jane was the key to Nicolai's memory…but exploiting her meant dooming the only mortal he craved.
Review:
Fans of Gena Showalter are sure to devour her latest novel, a steamy modern fairy tale.  Jane Parker is a scientific genius who has spent the last year recovering from a horrific car crash that killed her entire family and left her unable to walk for months.  When she is finally released from the hospital, she returns to her small home in Oklahoma to live a life of boring and monotonous routine.  But one day a magical book is left on her doorstep, and after reading it she is transported to another world, where she meets Nicolai, a vampire and a sex slave.  He has magically called her to him to help him escape, and has glamoured her to appear to be the sadistic witch princess he killed.  Nicolai's original intentions are to escape at any cost, leaving Jane behind.  But he does not anticipate being intrigued by Jane's intelligence and bravery, and attracted to her at a primal level.  When the Queen of Hearts has Jane whipped for defying her, his plan to escape alone disappears, as his need to protect and rescue Jane overrides every other emotion.  When Nicolai goes animal/alpha, he goes ALL the way.  He is soon ripping out throats, removing limbs, grunting in one word sentences, and protecting the hell out of Jane.  Hubba hubba!
After a bloody escape from the palace,  Jane returns the favor and protects Nicolai as he recovers.  Their intense sexual attraction is enhanced by mutual respect, and pretty soon they are exploring their attraction.  Lots of steamy, erotic romping ensues.  Then sex-crazed ogres kidnap Jane, there's more fighting, rescues, danger and falling in love.
Jane is a great heroine.  She is incredibly smart, but also brave, strong, and willing to fight.  Her year of loss, surgeries and pain has molded her into a woman capable of handling almost anything, and she is not going to let a hot, animalistic, incredibly experienced vampire get away from her.
Nicolai is the personification of the alpha male, brooding, violent when necessary, protective, and EXPERIENCED.  He has, after all, been a sex slave, and before that he was a horny, spoiled prince.
The action keeps the plot moving  along at a rapid pace and the characters are both likeable.  The story was greatly improved with the well-developed main characters, as well as their detailed histories.  Nicolai is slowly starting to recover his memories, and realizing he has siblings to find and murdered parents to avenge.  Jane is struggling with the guilt that she spent her career studying magical creatures that somehow came into the human world.
As with other books by Gena Showalter, there is genuine humor in this story, and I laughed out loud several times.  The ending is very satisfying.  I can't wait to read the next story in this series!
Lord of the Vampires will be published August 23, 2011 by Harlequin Nocturne (#119). It is the first tale of the Royal House of Shadows Series. Forthcoming titles are Lord of Rage by Jill Monroe (September 20, 2011), Lord of the Wolfyn by Jessica Andersen (October, 2011), and Lord of the Abyss by Nalini Singh (November 2011). 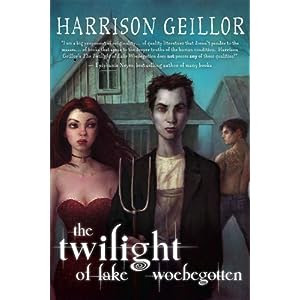 Back of the Book Blurb:  A small town... a plucky heroine, a shiny vampire, and a hunky Native American rival with a secret. But all is not as it seems in Lake Woebegotten.  Let Harrison Geillor reveal what lies beneath the seemingly placid surface. You''ll laugh. We promise. When Bonnie Grayduck relocates from sunny Santa Cruz, California to the small town of Lake Woebegotten, Minnesota, to live with her estranged father, chief of the local two-man police department, she thinks she''s leaving her troubles behind. But she soon becomes fascinated by another student - the brooding, beautiful Edwin Scullen, whose reclusive family hides a terrible secret. (Psst: they''re actually vampires. But they're the kind who don''t eat people, so it''s okay.)  Once Bonnie realizes what her new lover really is, she isn't afraid.  Instead, she sees potential. Because while Bonnie seems to her friends and family to be an ordinary, slightly clumsy, easily-distracted girl, she's really manipulative, calculating, power hungry, and not above committing murder to get her way - or even just to amuse herself. This is a love story about monsters... but the vampire isn't the monster.

Review:  This is a brilliantly twisted sendup of Stephenie Meyer's Twilight series.  Bella Swan has been transformed into Bonnie Grayduck, a smart, self-aware sociopath who has arrived in Lake Woebegotten for her senior year of high school.  Bonnie murdered a couple of classmates back in Santa Cruz, California, and while there is no evidence tying her to the deaths, there is plenty of suspicion, so spending a year with her police-chief father is very convenient.  And as a sociopath, it's all about self-serving convenience for our Bonnie.  Edwin is still the pale, gorgeous, brooding mysterious vampire, but as with Bella, the author has taken the minor personality traits and switched them to become the dominant ones.  Edwin is old-fashioned, priggish, has a thing for live teenage girls, and his concern for hurting Bonnie in the throes of passion does not prevent him from enjoying certain "services".

The story unfolds through the viewpoints of two narrative voices:  the first-person journals of Bonnie, and the omniscient Narrator, who occasionally interjects to clarify or fill in background.  Bonnie's narrative voice is cold and clear like a brook in winter.  All of the people in her life, including her parents, are "cattle" or puppets, to be manipulated and used to further Bonnie's goals.  And she definitely has goals!  First and foremost she must maintain an appropriate persona in order to blend into society, and her favored one is the slightly shy, clumsy pretty girl.  Bonnie believes this also gives her the advantage, as others will not expect her to be vicious and strong should she need to kill them.  Her main goal, though, is to be turned into a vampire,  by Edwin, with whom she has an infatuation.  Inasmuch as she is capable, Bonnie believes she has feelings for him, but the main appeal of Edwin is that he is her "ticket to superpowers and immortality and becoming an apex predator".
Bonnie's consistently cold, predatory, self-serving narcissism (yep, I'm aware of that redundancy but I like it) is so refreshing as the events of the Twilight series unfolds.  Her calculating nature is always running scenarios of manipulation, all to her advantage.  Bonnie learns that she is not the biggest monster in town, and as with herself, he is all too human.  Bonnie soon has her capable hands full as she juggles two vampires who want to kill her, maintaining a semi-fake relationship with Edwin in the hopes he will turn her into a vampire, hiding her past, and keeping up appearances as a teenager for her father and classmates.
The humor in this story was unexpected and truly laugh out loud funny.  Consistently tongue-in-cheek, dark and devious, and true to the sociopathic, predatory nature of Bonnie Grayduck, The Twilight of Lake Woebegotten was a fiendish delight!

The Twilight of Lake Woebegotten is published by Night Shade Books, and will be available October, 2011.
Posted by Sarah at 2:42 PM 4 comments:

Jeaniene Frost writes great paranormal romance and her Night Huntress World novella  Happily Never After is being released as an ebook for just $1.99!  At 106 pages this is a respectable length for a novella (I've purchased a couple other "novellas" that were less than 50 pages).  For more information check out the author's website at http://jeanienefrost.com/

Ebook only. $1.99.
July 18th, 2011
Isabella Spaga is about to reluctantly walk down the aisle with Mr. Dangerously Wrong…but not if dashing vampire Chance has anything to say about it. As a favor to Bones, Chance has come to derail this wedding of beauty to the beast. Now if only he can keep his hands off the bride. From New York Times bestselling author Jeaniene Frost’s Night Huntress world, it’s the wedding of the season…that everyone wants to miss. (Originally appeared in Weddings From Hell anthology)
Order at:
Amazon, Barnes & Noble, iTunes, or your favorite digital retailer.

And for your additional ebook reading pleasure, check out another new $1.99 release (offered at both Amazon and Barnes and Noble) by the fabulous Lynsay Sands. This is a great deal - a full length novel plus 80 pages of bonus material:

Book Blurb:
That hot guy tied to Lissianna Argeneau's bed? He's not dessert—he's the main course!
For a limited time, discover the Argeneau saga for only $1.99, plus three excerpts, including The Heiress, The Reluctant Vampire, and a preview of Lynsay’s short story in A Bite Before Christmas, available this October!

For more information about the author check out her website at http://www.lynsaysands.net/
Posted by Sarah at 3:01 PM No comments: