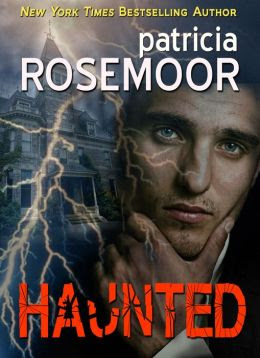 (I purchased this book.)

Blurb:
Dunescape Cottage brought Bram Vanmatre home to haunting childhood memories of a night when the lights went out, priceless jewels disappeared, and his father washed up dead on a deserted beach.

The crumbling mansion called to Echo St. Clair every time she came near. She wanted to deny its supernatural attraction until, trapped in one of its underground chambers, she was confronted by its ghost.

Dunescape Cottage linked Bram and Echo together. Even as they succumbed to their undeniable attraction, they were equally seduced by the houses mysteries...and on the stormy night of the Dunescape Halloween masked ball, they came face-to-face with the past.

Review:
I am SO far behind posting reviews.  One very sick dog, two out-of-town trips and a day spent in the ER and my schedule is shot all to hell.  I meant to post this before Halloween, but it's a great spooky romance perfect for any time of the year.
A deliciously atmospheric and creepy paranormal romantic suspense, Haunted is very gothic in style.  Dunescape Cottage is as much a main character as Bram and Echo, with its grand scale, crumbling opulence, secret passageways and ghostly happenings.  As Echo prepares the house for a haunted house benefit, the house seems to come alive as strange things happen.  The owner, Bram's aunt, is a little nutty but loves Echo's plans.  Bram, newly arrived in town after an absence of decades, hates the idea but likes Echo.  Bram was pretty stiff as a character initially, but as the story unfolds his behavior is explained.
As the night of the benefit gets closer it becomes very obvious that someone wants to scare and possibly hurt Echo, which brings out Bram's protective instincts, forcing him to realize his attraction for her is becoming emotional as well.  Worried about Bram and his aunt cancelling the Haunted House benefit, Echo doesn't share all the ghostly happenings she is experiencing until it's almost too late. Throw in an old unsolved murder, Bram's arrogant and bitchy mother, a voodoo practicing health aide and some nasty neighbors, and the cast of characters is satisfying and the mystery is maintained until the end.
Fans of old-school Gothic romances will especially love this book.  A spooky setting, a varied cast of suspicious characters, a hero who appears sinister at times, a spunky heroine and no graphic sex combine to make this a delightful package.

Check out Patricia Rosemoor on Goodreads. 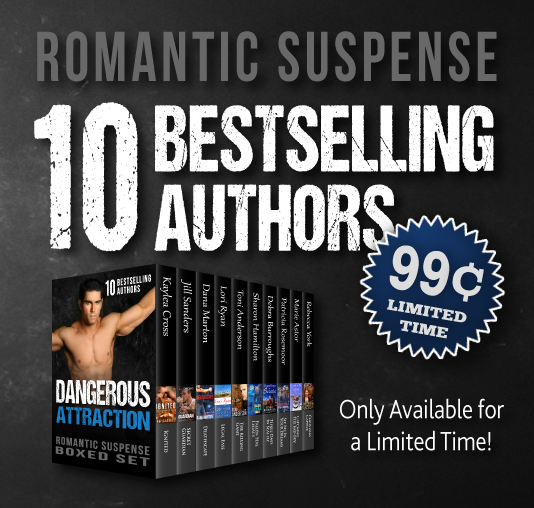 (Disclosure:  I work for this group of authors.)

The authors are celebrating the release with a 90% OFF SUPER SALE for 1 week only, pricing the entire boxed set at just 99 cents from November 10-16, so grab this deal while you can.


From sweet to scorcher, these stories are a must read. It’s a mini-vacation for your mind for 99c! Fall in love with our sexy cops, tough military heroes, and hot CEOs. Treat yourself to an amazing reading experience by some of the top authors of romantic suspense.

Ignited by award-winning author and national bestselling author, Kaylea Cross – Can sexy ex-SEAL, Hunter keep Khalia safe from the men who took her father’s life? (Scorcher) Secret Guardian by international bestselling author, Jill Sanders – Will ex-special forces hero, Ethan, save Ann in time, only to lose himself to love? (Scorcher) Deathscape by Daphne du Maurier Award of Excellence recipient and Rita Award finalist, Dana Marton – Detective Jack Sullivan will do anything to put Ashley in prison for her crimes…even if he’s falling in love with her. (Sensual) Legal Ease by award winning and national bestselling author Lori Ryan – Marrying Kelly solved the problems this steamy CEO faced at his company, but will he ever be able to forgive himself for the price she has to pay? (Scorcher)
The Killing Game by international bestselling author, Toni Anderson – Forced to choose between his country and his heart, British SAS Soldier, Ty Dempsey risks it all to save Axelle. (Sensual)
Fallen SEAL Legacy by national bestselling author, Sharon Hamilton – Will Navy SEAL Cooper be able to survive the loss of the woman he loves, or will his self-sacrifice be enough to keep Libby safe? (Scorcher)
Three Days in Seattle by national bestselling author, Debra Burroughs – A gorgeous Blonde, a kidnapped Sister, a handsome Stranger, and a vengeful Killer. The desperate race is on to find the sister before both women wind up dead. (Sweet)
See Me in Your Dreams by Patricia Rosemoor, Golden Heart Winner and two-time recipient of the Romantic Times Career Achievement Award – Her dreams allow her to see through his missing daughter's eyes, but he thinks she’s a con woman...until she dreams of something known only to him and the girl. (Sensual)
Catching the Bad Guy by national bestselling author, Marie Astor – Top-notch white collar crime investigators Janet Maple and Dennis Walker team up to solve what could be the biggest case of their careers, but will their attraction to each other get in the way? (Sensual)
Bonus Christmas Novella, Christmas Captive by Romantic Times Career Achievement Award Winner and Rita Finalist, Ruth Glick (Rebecca York) – Her special sight let her glimpse the Christmases past of this international financier, but did he have a Christmas future? 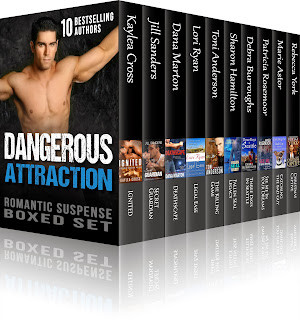 Join the fun on the Dangerous Attraction Boxed Set Facebook page for your chance to win an iPad Mini,
and stay updated on events, contests, and giveaways!
Posted by Sarah at 12:00 AM No comments: