In a world so dark and seductive, expect nothing less than a triple-cross in the explosive all-new Ghostwalker novel by #1 New York Times bestselling author Christine Feehan…
In an underground club, a high-ranking public official spends his secret nights indulging in fantasies as exciting as they are depraved. For a seductive employee of the Dungeon, it’s her job to fulfill them. But she’s playing a far more dangerous game—one of blackmail, politics, and murder that reaches into the shadow world of the Ghostwalkers, and the creation of a spectacular, one-of-a-kind new weapon of defense.
But when a dictator makes his own catastrophic moves, the Ghostwalkers have no choice but to bring in two major players—a man and woman both driven by passion and revenge. Both expendable. Both with nothing left to lose.

I thought the above blurb was so inadequate, I am including the following from Publisher's Weekly:
Feehan’s 10th GhostWalker novel (after Ruthless Game) is a suspenseful psychic romance burdened by an opening section that lacks plausibility. Azami Yoshiie and Ghostwalker Sam Johnson meet and fall in love during a lengthy attack on the GhostWalker compound. Their lust-filled introduction while in mortal danger doesn’t wash, even though both were psychically enhanced by an evil genius. Dr. Whitney used his brilliance to help create a secret military force. On the side he experimented with little girls, many of whom, like Azami, he tortured and then threw away. Now Azami is a successful software expert and Mission Impossible–level assassin, and she vows to thwart Whitney’s nefarious manipulations, which currently involve sacrificing Sam to an assault on a corrupt Congolese general. Sam doubts Azami’s loyalties, but she soon proves her worth to the team. Strongly intertwined thriller and romantic elements tip the balance in favor of the romance, which quickly turns poignant, but that initial credibility issue looms large.


Review:  Fans of Christine Feehan will not be disappointed with this 10th entry in her great Ghostwalkers series.  The story starts out fast and violent, full of conspiracy and death. After being tortured and used by Whitney as a live dissection lab rat, simply because she had no apparent psychic talents, Thorn was tossed into the streets of Japan, where she was rescued by a man who became her father and mentor.  Raised with love and trained in the way of the samurai along with her two "brothers", Thorn has grown into a beautiful and powerful woman who is also an incredibly skilled assassin.  Despite her loving upbringing, Thorn has never been able to let go of her rage against Peter Whitney - and who can blame her?  As an adult running a state-of-the-art satelllite/software company with her brothers, Thorn, now known as Azami, finds herself in the unique position of having business communications with Whitney.  She decides to destroy him, naturally.  Just weeks after turning Whitney's offer down, her company is contacted by Lily Whitney, who is alos interested in purchasing a satellite.  After Azami and her brothers arrive at the Montana (? I can't remember) compound, they and their Ghostwalker escorts are violently attacked.  Helicopters, ground troops, automatic weapons, oh my!  Amazi and Sam soon become battle buddies, fighting their way through the enemies, learning that they are both teleporters and psychic.  Sam knows she is a Ghostwalker right away, but not everyone can sense her energy, and the other are naturally suspicious of her intentions.
Before a week has gone by, Sam and Azami are engaged to be married and she has moved into his house on the compound.  And this is when things get a little....unbelievable.  When Sam asks her brother's permission to marry Azami, one of them produces a beautiful ring made by their dead father  for just such a moment.  And I found myself wondering if they travel with that ring on every business trip?  Sam heads home after Azami's brother tells him that she is waiting for him at his house, and discovers paper lanterns all over his stream and pond (when did she make, light and sail these?  When?) and she is waiting to give him a loving and traditional full body, mind and spirit cleansing.  Which I'm good with - it was quite touching.  But all of a sudden she is calling him "Sammy" - what is up with that?  Is it a traditional Japanese term of endearment to add an "ee" sound at the end of a name?  Because otherwise it sounds pretty silly, and it had the effect of snapping me right out of the story.
But I snapped right back in when Sam's foster father, General Ranier, arrives and is either working for Whitney or has been set up to send Sam into certain torture and death.  Azami is not having any of that, though, and her high-tech satellite and comms capability will give the Ghostwalker team the edge when they walk into the trap.
As with most of Feehan's stories, there is non-stop repetition of phrases and descriptions - she could easily cut out several pages worth and the story would not suffer in the least. But Feehan writes such a fun, suspenseful, sexy and exciting story I CANNOT STOP READING.  Love her, love her, love her.  And I think the reason is her incredible story-telling skills.  She creates these rich, complicated worlds that feel real.  Her characters are fabulous, flawed and likeable, and her bad guys are really, really rotten.


For more information check out the author's website at christinefeehan.net. 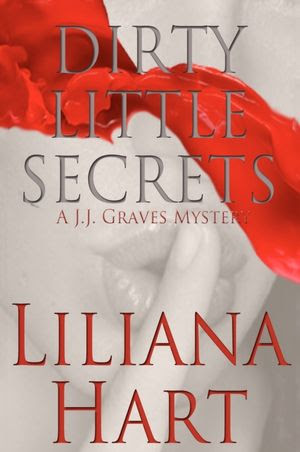 Back of the Book Blurbs:
Dirty Little Secrets:  J.J. Graves has seen a lot of dead bodies in her line of work...

She's not only in the mortuary business, but she's also the coroner for King George County, Virginia. When a grisly murder is discovered in the small town of Bloody Mary, it's up to J.J. and her best friend, Detective Jack Lawson, to bring the victim justice.

The murders are piling up...

When a popular mystery writer shows up on J.J.'s doorstep with plans of writing his new book about the Bloody Mary Serial Killer, J.J. has to decide if he might be going above and beyond the call of duty to create the spine tinglers he's so well known for.

And passions are rising...

J.J and Jack discover each victim had a shocking secret, and the very foundation of J.J.'s life is in danger of crumbling when it turns out she’s harboring secrets of her own—secrets that make her a perfect target in a deadly game.

A Dirty Shame:  J.J. Graves is back in Bloody Mary, but she's a long way from feeling at home. Between her physical scars from being the target of a murderer and the emotional scars left by her parents, she doesn't know who she can trust. But death doesn't stop for anyone.

The first murder is grisly. The second even more so. And though things are shaky between them, she and her best friend, Jack, have no choice but to join forces and find the killer. Because the life of someone they love dearly hangs in the balance.


Review:   I'm reviewing these books together because a)I'm lazy, and b) I read these books back-to-back and loved them both.  Really top-notch romantic suspense and extremely well-written.
This is a new series by Liliana Hart featuring small town mortician and coroner J.J.Graves, who has recently returned home to Bloody Mary, Virginia after the death of her parents.  J.J. feels pressured to give up her career as an ER doctor in order to take over the family funeral home business.  After the death of her parents she learned (when the FBI came calling) that her parents had been engaged in illegal activities.

J.J. is a great character. She is smart, strong, and wounded.  She is also a smart-ass with a great sense of dry humor.  I like her.  She has spent the last ten years in college and med school and then the ER, she has no living family, and hasn't had sex in three years.  Her parents had some kind of illegal and secret life, so the FBI is still poking around months after her parents deaths, and she feels like a pariah in her small hometown.  But she has a tight-knit support group of childhood friends, and one of them is her oldest and best friend, Jack, the hot horny sheriff of Bloody Mary.  She and Jack have been best friends since grade school, and he is her anchor.  As sheriff and coroner they also work closely together, and when a woman they've known their entire lives is found murdered, it's the roller-coaster start to a series of homicides and secrets that will affect everyone in their circle.
When a sexy mystery writer shows up asking to shadow her on the job for research, J.J.'s sleeping hormones wake up and she is soon busy making up for her three year dry spell.  Meanwhile Jack show some unexpected jealousy, and J.J. is trying her damnedest to figure out murders and men at the same time.  The ending is violent, conclusive, and a great emotional cliff-hanger, which is why I immediately started the next book.

In the 2nd book, A Dirty Shame, we learn more about J.J.'s parents and there is some satisfying romancing going on.  I'm not going to add more to that comment, because I don't want to spoil it for new readers. J.J. is literally driving back into town after months of isolated recovery at her parent's Poconos cabin, when she makes a horrific discovery.  And just like that she is back in her groove, running a funeral home, performing as the coroner, verbally sparring with Jack and avoiding his flirty innuendos and any other emotional contact as well, and pretending the harsh judgement of half the town does not bother her.
When the apparent hate crime has ties to one of their best friends, Jack and J.J. are emotionally caught up in the investigation, even as their own emotions are now out in the open.  I really love their relationship.  Jack is supremely confident and insightful, and understands J.J. better than anyone.  And she in turn trusts and loved him unconditionally as well.  She has just never in emotions and relationships before because of her family and family history.  Jack and J.J.'s teasing and flirting is witty, sexy and smart - some of the best dialogue I have read in a very long time.  The sex scenes are hot, intense and hubba-hubba worthy without being very graphic.

The setting of this series is a small southern town with a lot of personality.  Bloody Mary is a small town, full of Victorian-style houses that populate the brick-lined streets, which are named for the dead wives of Henry VIII.  The population is a mixture of rich and poor, black and white, local and non-local.  And much like the small town I grew up in, local means at least 2nd generation.  Living there for 25+ years still makes you the new guy.  As interesting as the town is, the author doesn't indulge in too much quirkiness other than street names, and the interesting locals feel normally interesting and nuts, not "quaint and colorful".

If you like the TV show "Bones" you will love this series.  There are a lot of similarities - the gritty, violent mystery, the smart verbal sparring of the two romantic leads, and the sexy personal relationship that spills over into their shared worklife.

For more information visit the author's website at http://www.lilianahart.com/.