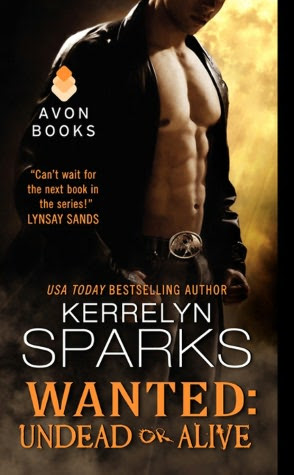 He's a vampire from the big city . . .
Phineas McKinney thought New York City was tough, until he was attacked by Malcontents—evil vampires who consider mortals to be snacks. Saved by the good vampires, Phin swore to devote his now undead life to stopping the Malcontents. He's got his job cut out for him when word comes that their enemy may be hiding in Wyoming. What does a city boy like him know about horses and campfires? Good thing he's got Brynley Jones with him . . . if only she didn't hate every vampire on earth.
She's a werewolf princess . . .
Bryn believes vampires are seductive and charming, and that makes them dangerous. So she's more than a little annoyed about teaming up with Phin, even if he is the only bloodsucker able to make her inner wolf purr. But as they hunt down the new leader of the Malcontents, danger threatens . . . and Phineas and Brynley discover a passion that will rock the foundation of their supernatural world.

Review:   First things first - can we just have a moment of awed silence for the cover of this book?..........OK, I'm back.  Simple, elegant and clear, sexy imagery - love it!!
I am a huge fan of Kerrelyn Sparks' Love at Stake books for their fun, romantic and consistently entertaining style.  She regularly introduces new characters, kills off bad guys and sets up new evildoers, and the adventures continue feeling fresh.  On the surface these are what I call "light and fluffy" books, meaning they are a quick read and there's not a lot of deep, dark, existential crap making me think more than I want to at the time.  But "light and fluffy" is deceptively hard to write well, and these books are extremely well-done.  They keep me reading late into the night, and Wanted: Undead or Alive is no exception.
I was a little worried that this book would be my first disappointment in the series, because the character of Phineas has been somewhat cartoonish and over-the-top.  But his story starts off with a lot of insight into Phineas as a person, and before I knew it I cared about him as much as any other character.  Phineas is one of the youngest vampires, and still has ties to the mortal world.  His love for his family and younger brother really make him a sweet, sexy man.  Previous stories have shown glimpses of Phineas' kindness and awareness of others' feelings (especially when his friend Phil was in love with Vanda, in Forbidden Nights with a Vampire), and his compassion just makes him sexier.
When Phineas and Bryn are assigned as a team, their mutual attraction and denial of it create sparks and a lot of tension-building situations.  Their time alone together in the wilderness really brings out their personalities and made for some really romantic moments (in spite of a skunky smelling old were-bear).  Not to mention some very funny parts as a city boy learns about horses.
Bryn's family life as a werewolf has a very dark side, and Phineas is determined to protect her at all costs when her father tries to sell her off in a werewolf marriage alliance. His devotion to her brings out his alpha male side and it's all kinds of sexy.
The hunt for crazy Queen Corky leads to new villains, an entire pack of werewolves with some very different values, and some tantalizing insights into Howard's past (is his book next?!).
Book #12 is another very satisfying, romantic adventure and leaves me looking forward to the next one - a major feat with a series of this length!

For more information visit the author's website at http://www.kerrelynsparks.com.