Demon Hunting in the Deep South by Lexi George

Back of the Book Blurb:  Evie Douglass doesn’t know what’s worse—the demons secretly infesting her small Alabama hometown…or human belle-from-hell Meredith Starr Peterson, who’s made her life miserable since high school. But when the “Death Starr” is brutally murdered and Evie is the number-one suspect, she’s suddenly besieged by the evil-not-dead-enough and Meredith’s furious specter. The only way she can clear her name is to get out from under demon hunter Ansgar’s grim protection. He’s blond, breathtaking, and the most lethal of all his kin, but after years of teasing, Evie is wary of anyone who swears her plus-size self is beautiful. However, having Ansgar all over her is sparking outrageous powers Evie didn’t know she had. And she’ll face any ultimate evil to keep this sexy slayer in this dimension and in her bed for all eternity…

I won a copy of this book from an author giveaway on my friend Lisa's awesome book review blog, Modokker Book Picks at http://modokkerbookpicks.blogspot.com/?zx=bb75491281932fdc.  Check it out!

Warning:  This is one of those books that keep you reading while you should be helping your kids with their homework, working, finding out what the new puppy is destroying, or listening to your husband talking about...something.  Too bad!  Because this is one of the funniest, wackiest and most romantic books I have read in a very long time.  Lexi George has one of the strongest, and clearest voices writing today.  Her writing is chock full of laugh-out-loud expressions and turns of phrase that add such personality and humor to every paragraph.
Evie is a smart, sexy, curvy (uh, what happened to that scrawny cover model?) woman who is also shy and quiet by nature.  She has a fiercely loyal and fabulously outspoken best friend named Addy who is married to a demon hunter, and a mysterious recent past that has left her confused and lost.  Evie has been verbally abused by her bitchy former classmate, Meredith "Death Starr" Peterson, and her minions since they were children, and when Evie finds Meredith hacked to death at work, things don't look good for Evie.  Pretty soon mysterious things start happening (teleportation, fairies, sexy guys coming in to her) , and Evie thinks she might be losing her mind.  Before the book even gets to page 50, Evie has a hunky demon-hunting bodyguard who's crazy in love with her, an oddly perceptive (and hot!) sheriff investigating her for the murder of the Death Starr, a demon-possessed chihuahua and his nutty human mama, both on the run from a doggie serial killer, and the ghost of the rotten Meredith in her life.  Whew!  And then things really get going, so hold on tight.
One of the best things about this book besides the zany humor and fun, is the humanity of the characters.  Rather than cardboard-thin stereotypes, George has created people with foibles and talents, who try their best but frequently make stupid and hysterical mistakes.  There's a lot of love and a lot of heart in this book.  Add in hunky demon-hunters, violence, mayhem, deliciously hot sex, and baked goods, and you've got one delightful story.

Published in August 2012, this is the second book in Lexi George's funny, romantic series, following Demon Hunting in Dixie.  There is also a related short story in the book So I Married A Demon Slayer (reviewed on this blog).

For more information visit the author's website at http://www.lexigeorge.com/. 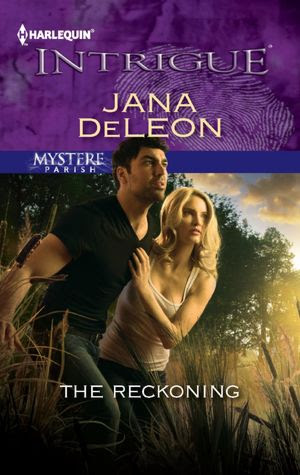 In a tiny bayou town with far too many wicked secrets, the sudden disappearance of a six-year-old girl is a mystery Sheriff Holt Chamberlain is determined to solve. But teaming up with Alexandria Bastin is a complication he didn't expect. Nor is he prepared to collide with the dark side of Cajun culture—and his own troubled past.
The frantic search leads them to a place said to hold magic, an eerie island where Alex is also working her charm on him. At one time, he'd been forced to leave her brokenhearted. And now , dangerously close to the truth, he'll do anything to protect her from the evil that surrounds them—an evil that might hold the key to sending a little girl home.…

Review:
Released October 1, 2012, The Reckoning is the first of a three book series by Deleon being released by Harlequin Intrigue featuring the citizens of the creepy Mystere Parish in the steamy bayous of Louisiana.  Jana Deleon is one of my favorite authors, and her new series has a great start, establishing Mystere Parish as a place of dark secrets, danger, and strange happenings.
The book starts with a bang, when Alex is called home from New Orleans by her cousin Sarah, whose daughter has been kidnapped.  The police in their small hometown think Sarah's estranged husband has taken his daughter, but Alex believes Sarah that a stranger must have taken her.  As a psychiatrist Alex quickly prescribes something for Sarah, believing she needs help to stay calm and deal with the situation.  I thought that was a little  arrogant on Alex's part, and it took me longer to warm up to her than I would have liked.  The acting sheriff soon arrives, and it turns out he is none other than Holt Chamberlin, the man who broke Alex's heart ten years ago when he left her and joined the military.  Seeing each other again after all those years gives both Alex and Holt a shock, triggering feelings both thought long gone.  But their focus is on finding the little girl, and they soon realize that not only did her father not take her, but the kidnapper is someone local, someone they know.
They find evidence pointing to a spooky island inhabited by an old woman believed to be a witch, who was implicated in the disappearance of three little girls over thirty years ago.  When Alex was a little girl she and Sarah went to the island on a dare, and saw something so horrifying that as an adult Alex is still terrified of the place.  Adding to the creepy atmosphere is the strange, watchful presence of crows, and the sinister appearance of dolls.
Alex is a strong, capable heroine, who is focused on supporting her cousin Sarah and finding her little girl.  She is determined not to let her feelings for Holt show, believing that he has not changed much over the years.  But Holt is no longer the same boy who ran away from both Alex and his father's legacy, and as they work together their feelings are rekindled.  Getting to know one another as adults, while dealing with their still-present feelings, all under the pressure cooker of looking for a missing child created a really compelling story that had me reading way past my bedtime.

Jana Deleon is great at blending mystery, romance, and a touch of the paranormal.  Her stories have well-developed characters who have complicated histories.  Her settings are like an additional character, because they are so vivid and real.  When I read her books I feel like I can see, smell and hear the sounds of the swamps and the small towns.