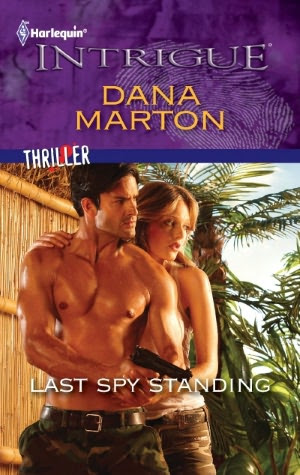 Back of the Book Blurb:
Black ops specialist Mitch Mendoza had thought this South American rescue mission would be routine. But the jungle held unexpected dangers: deadly snakes, armed drug runners and Megan Cassidy. The undercover CIA agent had legs for miles and a hidden agenda—one that interfered with Mitch's plans. So though he was a lone wolf, he had to keep her close, or risk letting his mission fail. After years of working alone, Mitch found himself distracted by Megan's steely resolve and her soft curves. And he couldn't afford that. Not if he wanted this assignment to be a success…and get both of them out of the jungle alive.

Review:
May I first just say - "HUBBA HUBBA!" -  to the cover!?  Okay, I just needed a moment.
Now on to the review...
Last Spy Standing starts in the middle of the South American jungle, as Mitch is trying to rescue the obnoxious son of a US Governor.  Zak, a trust-fund brat, has just killed the second-in-command of a Columbian druglord and he and Mitch are trying to outrun the druglord when they literally run into a beautiful American woman at a river crossing.
Turns out Megan is a CIA spy who has infiltrated a drug lord's operation and has her own personal agenda, trying to locate her DEA agent brother.  Megan and Mitch both want Zak, and their separate missions seem to be at odds.  Pretty soon they are going head to head trying to complete their own missions with Zak as the object of their tug-of-war.
The action and sexual tension is fast paced and intense - I especially liked the fight scenes between Mitch and Megan.  As they try and stay focused on their separate yet overlapping missions, they both struggle with intense sexual attraction and growing respect while they are arguing and sometimes literally fighting over Zak, a weapon, or control.  The nonstop action propels the story forward, as unexpected events occur and Mitch and Megan eventually try and help each other out.  Their growing attraction is a great diversion and counterpoint to their fighting.  Megan is a great heroine - she can kick ass as well as Mitch, and they save each other with both their wits and fighting skills several times.  Love that!
The weakness of the story for me was the lack of a well-described setting.  They're in an amazing location, the South American jungle, but during all these hikes through the jungle, and fights rolling around on the ground, there are many references to "poisonous bugs and snakes" but few other descriptions to create a strong sense of place for me as a reader.  The jungle is so rich with life and danger, and as a location it really drives a lot of this story, yet it's underdeveloped.
Overall, Last Spy Standing was a fun, sexy read, and the intense action and growing relationship made for a great escape from reality!


Last Spy Standing will be released on 1/3/2012, and I was fortunate enough to receive a copy from Dana Marton for review.

She has written several books (over fifteen for the Harlequin Intrigue line) and novellas, and is is the recipient of the Daphne DuMaurier Award of Excellence.

The Doomsday Key by James Rollins


At Princeton University, a famed geneticist dies inside a biohazard lab. In Rome, a Vatican archaeologist is found dead in St. Peter's Basilica. In Africa, a U.S. senator's son is slain outside a Red Cross camp.
Three murder victims on three continents, linked by a pagan Druidic cross burned into their flesh.

Commander Gray Pierce and Sigma Force have only days to solve an apocalyptic puzzle dating back centuries. Aided by two women from his past—one his ex-lover, the other his new partner—Gray must uncover a horrifying secret that threatens America and the world, even if it means sacrificing the life of one of the women at his side. The race is on—from the Roman Coliseum to the icy peaks of Norway to the lost tombs of Celtic kings—and the future hangs in the balance. For humankind's ultimate nightmare is locked within a talisman buried by a dead saint—an ancient artifact known as . . . The Doomsday Key
Review:  Released in 2009, The Doomsday Key is the sixth Sigma Force novel, and is another intriguing, exciting, fascinating adventure.  Sigma Force is a secret, blackest of the black ops organization of the United States.  They investigate odd and unusual events that potentially may jeopardize the USA and world stability. In The Doomsday Key, Sigma head Painter Crowe, top agent Gray Pierce, and his team are on the trail of a conspiracy to control global population through the food supply.  Seemingly unconnected events are puzzle pieces sending his team on a race to find the antidote to a horrific and ancient wasting disease about to be unleashed.  In this adventure Gray's former lover Rachel, Guild operative/mole Seichan, Monk, Kowalski and a new agent race to beat the Guild to the antidote.
From the Svalbard Global Seed Vault, to an island off the coast of Wales, peat bogs in England and an ancient monastery in France, the book is a travel guide of places I want to visit.  The author's descriptions alone are worth the reading, and the fact that it's part of a well-constructed mystery is all the better.
But what really holds these stories together and creates the magic are the characters.  There is a history with each character, a three-dimensional background of everyday life, relationships, foibles and quirks (hello, Kowalski!!) that make them seem real and let the reader care about what is happening.  I feel like I know them, and each adventure adds to that for me.
A few more clues to the mysterious and seemingly omniscient Guild are given here, and Seichan has a larger role.  More insights into her past are given, and she is less the assassin and more the human agent here than in previous novels.  The new guy, Creed, is an interesting addition and a good counterpoint for Monk, back on active duty following a lengthy recovery.  It was fun to see Monk, a seasoned agent compared to Creed, play the role of senior agent/teacher.  I can't give away much more without spoiling the plot, but the book was excellent.
I am a huge fan of Rollins - he is probably my favorite thriller writer, along with Steve Berry (Cotton Malone series) and Lee Child (Jack Reacher series).  He seamlessly blends fact, history, legend, technology and fiction into a cohesive, exciting adventure.  And at the end he clarifies what is real and what is made up - it's absolutely fascinating how much of his books are real.
Now on to The Devil Colony (Sigma Force #7), so I will be caught up before Deep Fathom  (a stand-alone novel) is released in March 2012!

Here's a GREAT deal if you haven't read The Doomsday Key or The Last Oracle - an e-book double pack for the price of one ($7.99), available from Barnes & Noble and Amazon: 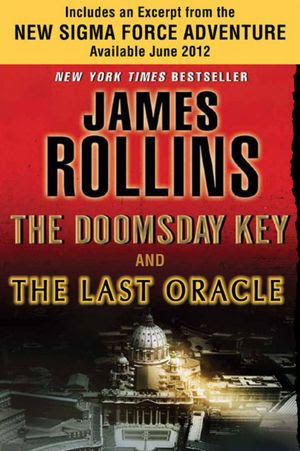 For more information visit the author's website at http://www.jamesrollins.com/.  Deep Fathom is now available for pre-order.