Oracle of Philadelphia (Earthbound Angels Book One) by Elizabeth Corrigan 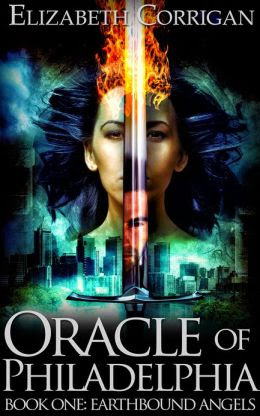 (I received a free copy from the author in exchange for review consideration.)


Blurb:
Carrie works at a diner in South Philadelphia, dispensing advice to humans and angels wise enough to seek her counsel. But there are some problems that even the best advice can’t solve.

Her latest supplicant, Sebastian, is unique among those who have sought her aid. He sold his soul to a demon in exchange for his sister’s life, but his heart remains pure.

Carrie has lived for millennia with the knowledge that her immortality is due to the suffering of others, and she cannot bear to see another good man damned when it is within her power to prevent it.

In order to renegotiate his contract, Carrie must travel into the depths of hell and parley with the demons that control its pathways. As the cost of her journey rises, Carrie must determine how much she is willing to sacrifice to save one good soul.

Review:
Published in March 2013, Oracle of Philadelphia is a fresh and original tale.  The book is narrated by Carrie, an immortal human who has the ability to read the minds of others.  Over six thousand years ago her village elders made a deal with a demon to ensure her immortality and thereby gain fame for the village.   But deals with demons are never straightforward, and Carrie was blamed for the ensuing bloodbath.  With her soul barred from going to heaven because of the actions of the elders (very old-testament, blaming the victim) Carrie has endured,because she has no other choice. She is immortal like the angels and demons, but unlike them has free will.   Her only real friend has been Bedlam, one of the fallen angels.  Bedlam has been staying on earth, avoiding Hell and the Abyss since the Fall.  His chaos-driven mind is white noise to Carrie, allowing her some peace among the buzzing thoughts of humans and angels.

One of the best aspects of this book is the incredibly fresh and humorous take on the Christian mythology of angels and demons.  The angels and demons are as petty and full of personality quirks as any human, driven by their personalities and going about the business of their domain.  It's basically a soap opera of divine dimensions, all witnessed by the low-key Carrie.

Until one day a pure, good soul enters her diner, bearing the mark of the Archdemon Azrael.  Sebastian has sold his soul to save his sister's life, and in all her millenia Carrie has never met another human with a soul as pure.  Believing that he doesn't belong in Hell, Carrie decides her life on the celestial sidelines has gone on long enough, and she spirit-journeys to Hell to seek out Azrael and try to save Sebastian's soul.  Over the course of five nights Carrie travels to Hell, visiting the domains of five archdemons, until she finds Azrael on the last night.  Each trip causes Carrie to remember a piece of history as she recalls how and when she met the demon, creating an amazingly rich backdrop of Carrie's life.  This part reminded me very much of Dante's Inferno.  And while the narrative was fascinating, and the world-building is simply outstanding, it also highlighted what I didn't like about the book, which is the rather thin plot driving this otherwise compelling narrative.  Trying to save Sebastian's soul is a worthy endeavor, and Carrie has finally had enough of being passive after thousands of years of observing and reporting.  But Oracle of Philadelphia did not feel like a mission to save a soul (and in the process redeem her own soul), but rather like a travel narrative.  A little more action to move the plot would have strengthened the story for me.

Other readers may not agree with me, and I strongly recommend this book based on the strong and unique world-building, the witty dialogue and humorous asides, and the distinct characters.  As a character-driven story, this is truly something special.

Visit the author at http://www.elizabethrcorrigan.com/

Purchase Oracle of Philadelphia at Amazon.

Check out Oracle of Philadelphia on Goodreads.